Slimming surgery Slimming surgery is a weight loss process performed by gastroenterologists on the digestive system and helps very heavy people lose weight. Unlike liposuction, which removes excess fat from the body, weight loss surgery focuses on the amount of food consumed and absorbed.

This is done in two ways: first, by limiting the amount of food you hold in your stomach and thus feeling fuller, and second, by shortening the small intestine and preventing the absorption of food molecules that are not consumed. The title energy source will become fat.

Slimming surgery is somewhat invasive and may be performed with laparoscopy. This is more preferred because it is less painful and accelerates the healing process. Depending on the patient’s needs and health conditions, open surgery may be performed. After this surgery, the patient should be careful about their lifestyle, they may regain weight. People with bulimia nervosa, or depressed people, are more likely to have this weight loss.

Surgery to lose weight is usually performed under general anesthesia and by laparoscopy. Each of these methods has different functions and effects on your digestive system and body.

Slimming surgery cannot be selected based on BMI. In fact, it depends on a number of factors, including nutrition and comorbidities. For example, those who have gastroesophageal reflux disease are not recommended to have sleeve surgery, or those with a history of familial gastric cancer should not undergo back surgery because the operation will separate the two parts of the stomach and we will no longer have access to it with an endoscope to examine the stomach. do.

Slave surgery is better for these people because it removes 75 to 80 percent of the stomach and reduces the risk of stomach cancer by 75 to 80 percent. At the same time, the rest of the stomach can be examined with an endoscope. In addition, sleeve surgery is not suitable for those who are accustomed to eating small meals, eating too much and cannot control themselves, because after weight loss surgery, with this amount of food, the stomach will be re-stomached and the person will gain weight. Of course, the patient’s own choice is also important in this regard.

Some men and women who have excess belly and flank fat and are unable to diet or exercise will undergo weight loss surgery if they have known what the consequences are for them.

Extensive research and studies in advanced societies have shown that more than 90% of men and women are dissatisfied with the appearance of their limbs and believe that changes in their body can be made through diet or exercise and slimming surgery.

However, this abdominal slimming surgery, like other cosmetic surgeries in the early twentieth century, did not make much progress, but after the calm that prevailed in the world and in the 50’s, surgeons noticed that the removal of skin and fat in the order that It was noted that the results are not very significant and like the facelift, the skin and fat should be separated from the tissues under it, ie the abdominal muscles.

Improving Slimming Surgery Results and Patients’ High Approach to Surgery Some surgeons found that their abdomen was not very large and that a large scar was not justified after slimming surgery, so the technique of mini-abdominoplasty or Tommy Tuck surgery In the 1980s, a smaller incision was made under the abdomen and the umbilicus was not dissected, but the muscles were repaired in the manner mentioned above, leaving less skin and fat and less scarring. Thus, in some patients, who are usually younger and have a smaller abdomen, Tommy Tuck’s surgery replaced classic surgery.

In general, in slimming surgery, although the abdominal wall and skin are flattened in the front of the abdomen and the skin and excess fat are removed, the upper parts of the umbilicus and sides that are not usually stretched remain prominent, so with the discovery of liposuction in the eighties. The beauty of suction was added to the technique of abdominal cosmetic surgery to correct the sides and top of the umbilicus. Modern suction abdominal surgery is an integral part of this operation.

With this explanation, patients with a very large abdomen should prepare themselves for major surgery with long anesthesia and a long scar under the abdomen (although surgeons usually make this gap so that it is hidden under underwear and casual swimwear). Also, prepare for a long recovery for a few weeks.

The best candidates for this weight loss surgery are men and women who are almost normal in appearance and body shape, but suffer from a large amount of fat deposits or loose skin in the abdomen that does not respond to exercise and diet.

The price of slimming surgery is one of the most important concerns of people who want to do this. For most people, the question is how much does slimming surgery cost and how is it calculated? Many factors affect the cost of slimming surgery, such as insurance coverage, personal health, the location of the surgery, and other factors, as well as more information. You can contact Dr. Najaf Beigi’s office for a free telephone consultation.

In general, there are four types of slimming surgery:

In this operation, the surgeon creates a sac by pinching the upper abdomen, then the small intestine is cut and attached to the lower part to create a smaller sac. As a result, you can’t eat as much as before and feel full sooner.

In this type of surgery, the initial part of your stomach is cut by a surgeon, and the tube that carries the food to the stomach enters the small intestine directly into your small intestine instead of the stomach. This will eliminate the amount of food that is stored in the stomach and cause you to eat more and not be full.

Of course, in this method, in addition to not feeling hungry, the amount of food absorption is also disturbed. Complications include poor nutrition or malnutrition, lack of absorption of vitamins and abnormal deficiency of vitamins B12 and D, as well as the possibility of dumping syndrome, which requires secondary surgery for hernias and gallbladder.

In this surgical procedure for weight loss, the initial part of the stomach is closed with an adjustable device. This will allow your stomach to eat less and reduce your hunger. The band can be adjusted via a skin device that is placed on the chest during the operation.

One of the new surgical procedures for weight loss is the use of glutectomy. In this procedure, most of the stomach is removed and the stomach becomes tubular. As a result, the amount of food that fits in is reduced and the person eats less food. One of the weaknesses of this method is that the weight loss can be reversed over time and is not permanent. It can also affect the secretion of hormones and compounds produced by the stomach.

In this surgery, the doctor cuts 80 percent of the stomach, and the remaining part, which looks like a banana, is so small that it can’t hold much food. As a result, you will eat less food.

In this procedure, your doctor will place an adjustable ring on the top of your abdomen and make a hole. It’s like tying a knot around your stomach. The rest of the abdomen remains under the ring. This ring is filled with salt water to adjust the beginning of the abdominal cavity. So when your stomach gets smaller, you eat less and your weight will not increase.

This procedure is similar to gastric bypass, in which there is a deviation in the intestine. In this method of weight loss surgery, by removing the pancreas from the food absorption pathway, your calorie intake will be drastically reduced.

In general, the best way to lose weight is to eat a healthy diet along with exercise. But in some cases, if you can’t do it, you can use surgery to lose weight. A variety of surgical procedures have their own advantages and disadvantages, and you can choose the best surgical method for weight loss in consultation with your doctor.

Today, slimming and then gastric lavage are more commonly used than other methods. According to research, the average weight loss rate with these surgeries in different people during a week is 700 to 1000 grams; This means that about 2.8 to 4 kg of weight loss occurs during a month and up to about 50 kg during a year. Of course, you should keep in mind that weight loss happens faster in the first few months. 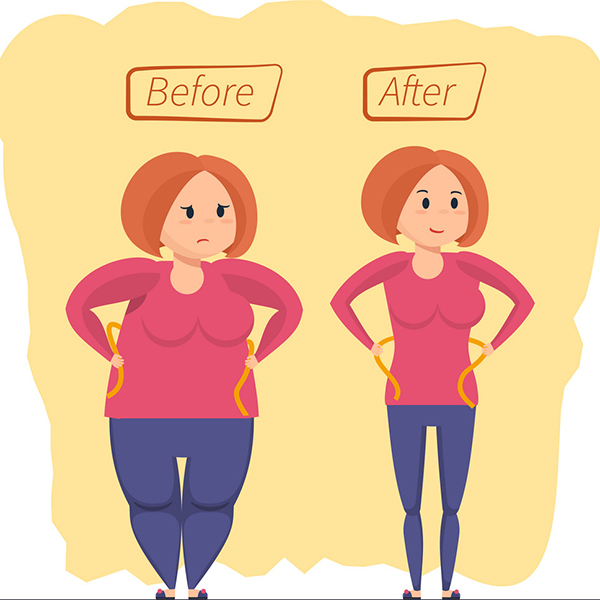 Side Effects of Slimming Surgery:

For most patients, weight loss occurs up to 65%, with more than 85% maintaining 50% of their initial weight loss.